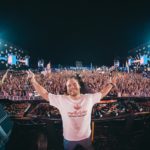 Whether it’s dubstep, trap, hip-hop, pop, or house music, Nitti Gritti has demonstrated his dynamism, proving he can flourish in any and every genre across the board. In late 2017, the Miami producer made his introductory appearance on Tchami’s CONFESSION imprint for a three-pronged EP. Nearly two years after the fact, Nitti Gritti is returning to the house-harking motherland. In presenting five scintillating and eclectic productions, Nitti Gritti has crafted another remarkable project with his 4 On The Floor EP.

While the song titles on the EP’s tracklisting may not initially appear familiar, the project has remained an enduring fixture in both Tchami and Malaa’s DJ sets in prior months. Flexing his dexterity in the lab, Nitti Gritti executes some irrefutably fun house anthems, including back-to-back collaborations with Shndō in “4 On The Floor” and “Moov” as well as solo cuts with “My Music” and “Out My Way.” “Back To Me” serves as the EP’s lone down-paced release, while retaining Nitti Gritti’s buoyant, hard-hitting fervor.

The multifaceted talent is currently slated for an appearance at Shaquille O’Neal’s Fun House stage during the follow-up weekend of Tomorrowland 2019 where he’s more than likely to rinse out the EP’s work in front of the Belgian-based festival.